Avanti is proud to announce that its 40.000th service lift has been produced.
Avanti has one of the largest installed bases globally serving 3 major technologies ladder guided, wire guided and rack pinion providing safe work in wind turbines.

Lift number 40.000 is a Shark L01 assembled at our factory in Shanghai China. The Avanti shark lift was originally launched in 2005 and was one of the first service lifts in the wind industry.

During the years the Avanti Shark lift has been updated, re-engineered to keep up with the changing demands in the wind industry and is today one of the most common and cost effective wire guided service lifts. 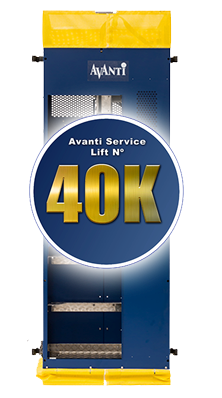